It has been generally accepted that Scots pine (Pinus sylvestris L.) became extinct in Ireland c. AD 400. The species was reintroduced in the mid-17th century and has been widely planted. It has been included in the Native Woodland Scheme, which provides grants to establish or restore native woodlands. However, its native status in Ireland has been disputed and the vegetation ecology and conservation value of Irish pinewoods have been poorly understood. These knowledge gaps have been addressed using an approach combining vegetation ecology and palaeoecology. Vegetation surveys were conducted at eighteen pinewoods in Ireland and six in Scotland. Cluster analysis was used to evaluate the floristic similarity between plots and classify them into groups. One of the Irish pinewoods was of unknown origin (Rockforest, Co. Clare). To reconstruct its vegetation history, a sediment core was extracted from Rockforest Lough. Pollen, macrofossil and dating analyses were conducted. Cluster analysis identified four groups, representing distinct pinewood vegetation types. The vegetation of certain Irish groups and sites exhibited similarities with that of extant native pinewoods elsewhere in oceanic north-west Europe or fossil assemblages from ancient Irish pinewoods. While the vegetation of Irish pinewoods did not correspond to that of typical Scottish Caledonian forests, Coronation Plantation and the bog pinewoods at Clonfinane and All Saints Bog exhibited strong similarities with other native Scottish pinewoods of high conservation value. Natural regeneration of P. sylvestris was poor overall. The pollen diagram from Rockforest Lough showed a continuously high Pinus pollen frequency (38-51% of total terrestrial pollen) from c. AD 350 to the present. Macrofossil evidence demonstrated local presence of P. sylvestris around Rockforest Lough c. AD 840. The available historical sources indicated a long history of woodland cover at Rockforest. A separate analysis of a peat core from nearby Aughrim Swamp also showed a continuous Pinus signal from c. AD 350 to the present. The findings of the vegetation analysis suggest that P. sylvestris woodlands are an important resource for Irish biodiversity, particularly given the country’s low native woodland cover. The palaeoecological data indicate that native P. sylvestris persisted at Rockforest from c. AD 350 to the present. The hypothesis that P. sylvestris became extinct in Ireland is rejected. These findings should inform evidence-based forest management and policy. They support the inclusion of P. sylvestris in the Native Woodland Scheme. In general, reintroduced P. sylvestris should be managed as a native species in Irish woodlands. The data presented should inform site and species selection. The P. sylvestris population at Rockforest is of high conservation value but its rarity increases its extinction risk. It should be carefully managed and monitored and seed-sourcing must be compatible with the long-term viability of the population. Cooperation between forestry and nature conservation agencies is needed to ensure its continued survival and to develop opportunities for the restoration of native pinewoods in Ireland. 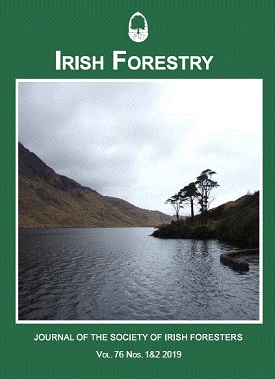