A comparison was made between four methods of generating roundwood production forecasts for private sector forests in Ireland which used varying levels of inventory data as inputs into the production Model. Two methods were based on stand variables: the Irish Dynamic Yield Model (IDYM) method and the General Yield Class (GYC) method. The other two methods were based on site variables used to derive predictions of productivity from climate and map-based data and include a local prediction (LPYC) and a national prediction of yield class (NPYC), the latter the same as that used in the All Ireland Roundwood Production Forecast 2016-2035 (Phillips et al. 2016). To determine the reliability of predictions for an individual stand, field measurements of yield class (GYC) were compared with the predictions of yield class derived using the NPYC and LPYC methods for 52 privately-owned stands of Sitka spruce in the north-west of Ireland. The prediction of yield class using the NPYC method had a low probability of agreement with GYC, with a large bias to under-predict yield class. The LPYC method had a higher probability of agreement and lower bias indicating a better assessment of local productivity. To assess the impact of the various productivity estimates on roundwood production forecasts, separate roundwood forecasts for the period 2016- 2035 were generated. The forecast produced using the NPYC method was used as a baseline for comparison purposes. As expected, the under-prediction of yield class using the NPYC method produced the lowest volume production estimate (318,454 m3) for the forecast period. Both the GYC and LPYC methods resulted in a significant increase in estimated volume production of between 25% and 29% over the baseline. The IDYM method provided the highest estimate of volume production (432,000 m3) for the forecast period, an increase of 35% over the baseline. The increased output predicted using the IDYM method is explained by the inclusion of stocking and basal area data, which more accurately reflected the increased growing stock of private forests than yield data derived using Forestry Commission yield models based on prescribed management. The increases in productivity associated with the use of LPYC, GYC and IDYM methods had the effect of producing shorter rotations and resulted in an increase in the area clearfelled and associated volume production. Perhaps more importantly, the timing of volume production was affected by using more accurate methods to assess productivity (i.e. LPYC, GYC, IDYM), owing to a higher yield-age profile of stands compared to those assessed using the NPYC predictions. The findings point to a possible under-estimation of the productivity for private stands in the All Ireland Roundwood Production Forecast and have implications for the timing of the forecasted volume which could be brought forward by 5 to 6 years. In the absence of field or aerial laser measurement of height and age, the use of the LPYC method is recommended for future private sector roundwood producion forecasts. 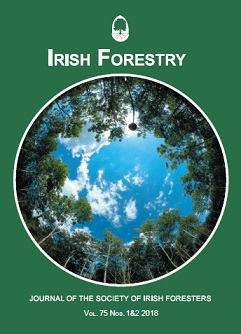